The Nizam of Hyderabad Necklace 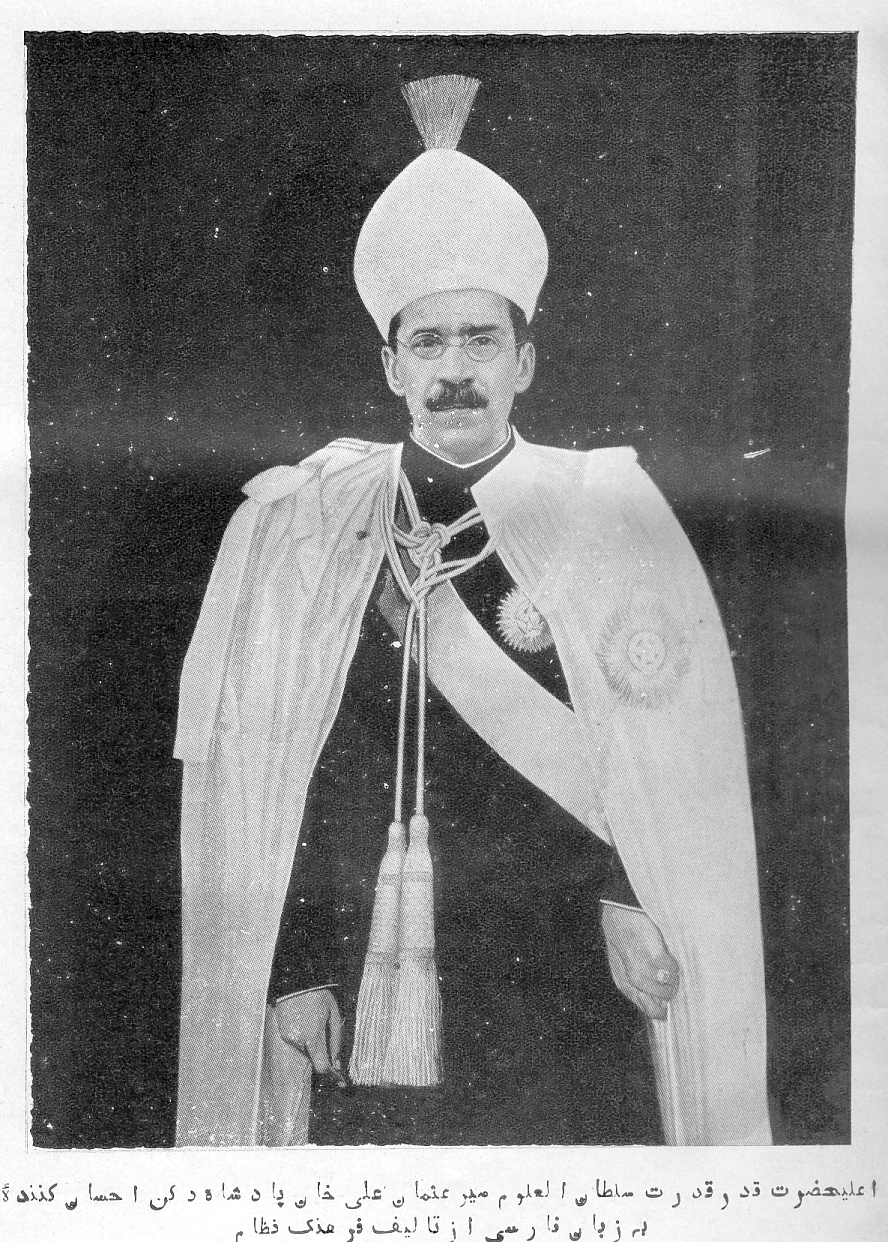 The Nizam of Hyderabad Necklace

On the 9th July 1947 the engagement was announced in the Court Circular of The Princess Elizabeth to Lieutenant Philip Mountbatten. In the months following the engagement, wedding presents began to arrive at an increasing rate.

The gifts covered the whole spectrum of the royal couple’s needs, from the practical to the lavish. It was barely two years after the end of the Second World War, and the Princess received numerous pairs of silk and nylon stockings, 500 cases of tinned pineapples from the Government of Queensland, to be distributed as she wished. The Government and people of Canada presented antique silver gilt dinner plates, items of silver tableware, a canteen of cutlery and a mink coat. President and Mrs Truman of the United States of America sent a Steuben glass vase and cover, etched with a merry-go-round scene. An appropriate gift was presented by royal couturier Mr Norman Hartnell, an engraved mother-of-pearl and ormolu French Empire jewel casket with snake handles, which once belonged to the Empress Josephine.

The wedding presents were displayed to the public at St James’s palace, and the printed list of wedding gifts described every item on display. The opening pages contained details of the jewellery given to the Princess by her parents, and her grandmother Queen Mary. These pieces provided the glittering highlight for every female viewer. The necklace and tiara presented by the Nizam of Hyderabad drew admiring sighs. 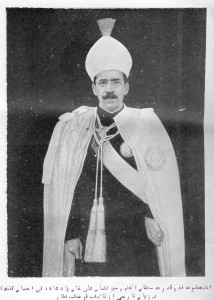 Nizam Osmar Ali Pasha (1886 – 1967) was the seventh and last ruler of Hyderabad. It was the foremost princely state of British India, and its ruler was a man of fabulous wealth, much of this was derived from the 19th century diamond trade. The Nizam was attributed by Time magazine in 1937 to be the world’s wealthiest man, and modern day estimates of his fortune would be 210 billion dollars. He owned a cavalcade of Rolls Royces, and in his principal palace 38 people were employed to dust the chandeliers. He possessed one of the finest and most valuable of all jewellery collections and on one occasion he decided to have his pearl collection sorted and graded. Bucket after bucket of pearls were taken from the treasury, they were washed and graded, then laid out on large sheets on the roof to dry. When the task was finished the entire palace roof was covered with pearls.

One well known story is that of the Jacob Diamond, a cushion cut stone weighing an estimated 184 carats. He discovered it completely by chance, stuffed into the toe of one of his late father’s slippers. Due to its size, he decided it would serve perfectly as a paperweight, and had it mounted on a gold base. When not in use, it was wrapped in newspaper. The Nizam was one of the few Indian Princes entitled to a 21 gun salute under British rule, but he lived simply. In his latter years he was seen in his apartments, chain smoking Golconda cigarettes, wearing dirty pyjamas, with ancient shoes on his feet and a worn and greasy fez on his head. He died on 24th February 1967; his funeral procession was one of the most magnificent ever held in India.

In 1947 the Nizam had instructed Cartier that his wedding gift was to be chosen by Princess Elizabeth herself, from their stock in London. The future bride selected a diamond tiara of floral design, and a necklace with central pendant. Both pieces were set with diamonds and mounted in platinum.

The tiara contained a large central floral cluster surrounded by open leaf sprays, with a smaller flower head on each side. The clusters were detachable to wear as brooches. The tiara was worn by the Princess in the early years of her marriage, but later it was rarely seen. In 1973 it was broken up, and the diamonds used for the ruby and diamond tiara made by Garrards in 1973. The three detachable brooches are still worn today by the Queen.

The necklace is composed of a pave’ set brilliant cut diamond central section with curving scrolls, and a smaller scroll section on either side, 13 emerald cut diamonds are included. A pear shape diamond pendant bordered by brilliant cuts is suspended from the centre. The central double pendant drop is detachable. A row of 38 brilliant diamonds form the neck band, with an oval diamond clasp.

The necklace was made in 1935 and had 5 graduated pendant drops hanging from the diamond sections. It was then sold only to be returned to Cartier’s stock in 1937 and redesigned to its present form.

After her marriage the Princess wore her wedding present jewellery regularly, as her collection was by no means large it would increase dramatically upon her Accession and on the death of Queen Mary.

On October 8th 1951 Princess Elizabeth and the Duke of Edinburgh began a 10,000 mile tour of Canada and it included a brief visit to Washington, where the Princess hosted a banquet at the Canadian Embassy for President Truman and his wife. The following morning newpapers carried the pictured of the Princess dressed in a turquoise and gold Hartnell gown, wearing the Nizam’s necklace; seated next to the President, her dazzling smile captivated everyone. President Truman said of the Royal couple’s visit; “Never before have we had such a wonderful young couple that so completely captured the hearts of us all”. Those words would undoubtedly be echoed in the summer of 2011 when the Duke and Duchess of Cambridge visited Canada.

In the 1950s the Queen wore the necklace for many official photographs and portraits. In 1952 it made a sparkling contrast to the strapless, rippled black taffeta crinoline by Hartnell, the Princess’s hands clasped on her lap among the leaf layers of the spreading skirt. After the Coronation in 1953, the royal couple embarked on a 7 month tour of the Commonwealth, and the necklace was seen by countless Australians when Her Majesty attended an evening engagement, wearing another Hartnell crinoline in yellow tulle, decorated with mimosa sprigs and sequins and on her right shoulder a large corsage of Australia’s national flower. History would repeat itself in April 2014 when it was the Cambridge’s turn to take Australia by storm.

The Nizam of Hyderabad’s necklace is worn by Her Majesty in her portrait miniature of the Royal Family order. The order was introduced by King George IV in 1820, and is in the Queen’s personal gift to female members of the Royal Family. It is composed of an oval portrait of the young Queen, wearing the Hartnell gown from the Canadian tour in 1951, surrounded by a mount of brilliant cut diamonds and set between every three diamonds, is a single baguette cut diamond. Surmounting the miniature – a diamond set and red enamel crown. On the reverse, the raised cypher of Queen Elizabeth II in polished gold below a red enamel and gold crown is placed against an engine turned ground. The order is pinned to a chartreuse yellow watered silk riband.

Today the necklace is worn less frequently by the Queen, but it was chosen for the series of photographs taken at Buckingham Palace by Annie Leibovitz, to mark the 6 day visit to America by the Queen and Prince Phillip in May 2007.

In the summer of the same year it was seen by thousands of visitors to the exhibition held at Buckingham Palace to celebrate the royal couple’s Diamond Wedding Anniversary. The Queen’s wedding dress, and jewelled presents were on display, the state apartments where the photographs were taken, and the wedding breakfast held were open.

In 2011 Katherine Middleton became H.R.H the Duchess of Cambridge and the most recent royal bride to wave to the massed crowds below, from the Palace balcony. On her first official royal appearance of the year, on the evening of February 11th 2014, the Duchess attended a fundraising gala and dinner at London’s National Portrait Gallery. The dress code for the dinner was ‘black tie with a hint of sparkle’. As she stepped from her car, she drew gasps from the waiting onlookers and the press. Dressed in a full length midnight blue silk dress, with velvet waistband by Jenny Packham, the ‘hint of sparkle‘ provided by the Nizam’s necklace which was loaned by the Queen.

Vintage jewels are now high fashion, and worn by the elegant 21st Century Duchess the necklace has spanned the generations.