Palazzo Panthers – The Big Cat Jewellery of the Duchess of Windsor

Palazzo Panthers – The Big Cat Jewellery of the Duchess of Windsor

This year, Cartier celebrates the centenary of their iconic jewelled panther. This magical, streamlined creature will forever be associated with two legendary women in the history of Cartier, its creator Jeanne Toussaint, and the woman who caused a sensation wearing them, the Duchess of Windsor. 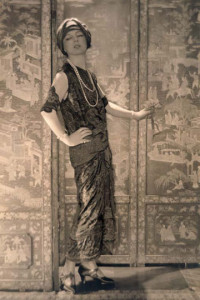 Jeanne Toussaint (1887 – 1976) was the muse and lover of Louis Cartier, in 1917 she received from him an onyx vanity case, depicting a diamond and onyx panther between a pair of cypress trees, a fitting gift for the woman he nicknamed “Panther”. In 1918 she joined Cartier, as a handbag stylist, her quick, exacting eye for design was noticed, and in 1933 she became their jewellery director. Her elegant Parisian apartment was furnished in pale tones, selected pieces of Chinese porcelain displayed to perfection, the floors strewn with speckled leopard pelt rugs. The inspiration for her jewels was perhaps drawn from the exotic Marchesa Casati, who had attended a Venetian ball with her pet cheetah on a leash. Toussaint’s friends included Coco Chanel, Cecil Beaton and Christian Dior, and the Windsors to whom she was introduced in 1936. She had been at the Rue de la Paix when Cartier opened its doors to Indian maharajahs, with fortunes in gems to be mounted into dazzling necklaces and turban ornaments, and to the playboy King Farouk of Egypt.

In her eighties she came to her office each day, a small, bright eyed, energetic woman in an elegant black jacket, her signature five ropes of pearls around her neck. Often she would travel on the metro, her coat concealing the precious jewels from fellow commuters. She retired in 1970 at the age of 83.

King Edward VII patronised Cartier on his frequent visits to Paris, and famously delivered the ultimate accolade to them, “Cartier, jeweller of Kings, King of Jewellers”. His grandson, Edward, Prince of Wales made purchases also, and was the subject of a sketch by Sem, illustrating a visit by him in 1924, doffing his hat as he passed between lines of excited, fashionable young ladies on tiptoe to catch a glimpse of “le Prince Charmant – Rue de la Paix”.

In 1936, the year of the three Kings, King Edward VIII was completely captivated by Wallis Simpson and showered her with superb gems, Queen Mary commented to her lady-in-waiting the Countess of Airlie: “He gives Mrs Simpson the most beautiful jewels”. His greatest desire was to marry Wallis and make her his queen; this resulted in crisis for the Royal Family and for the country. On the foggy night of December 11th 1936, Edward VIII made his final broadcast to the nation as King and Emperor: “You must believe me when I tell you that I have found it impossible to carry the heavy burden of responsibility and to discharge my duties as King as I would wish to do without the help and support of the woman I love”. 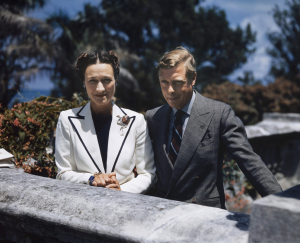 The date of their wedding was to be 3rd June 1937, at the Chateau de Conde’ on the Loire. Before the marriage, Cecil Beaton photographed Wallis in the iconic “lobster” evening dress of white organza with a large red lobster on the skirt by Schiaparelli. Soon she would wear the platinum wedding ring engraved “Wallis – your David”.

Throughout their married life they followed a stylish lifestyle, the Duke in large checked suits, pale shirts and ties with their distinctive Windsor knot, and his velvet smoking jackets, the Duchess always dressed superbly by Balenciaga, Dior and Givenchy, her shoes couture creation by Roger Vivier, her immaculate coiffure tended for 30 years by Alexandre, who travelled to London to arrange her hair for the Duke’s funeral in 1972. In 1948 the New York Dress institute voted her the best dressed woman of the year, for the third time.

For her, appearance mattered, everything had to be perfect, they partied with the jet set and cafe society, her jewellery always attracted attention and in that same year her collection was to acquire a brooch to inspire her contemporaries in that glittering world.

As Prince of Wales, the Duke had undertaken extensive tours of the Empire, and the big cats of these lands had sparked an idea in his mind, it was to Jean Toussaint that he entrusted this important commission, the first panther brooch. It was three dimensional – a great innovation in the world of Jewellery design.

A snarling leopard, its 18ct gold body with black enamel spots crouched with fiery eyes above a cabochon emerald of 116.74 carats. The Duke had supplied the emeralds from his collection. The following year he returned to Cartier to purchase the globular cabochon sapphire weighing 152.35 carats, it supported a seated panther, its body ablaze with brilliant diamonds and calibre’ cut square sapphires, its eyes pear shape yellow diamonds.

The Duchess wore the clip on the shoulder of a blue fitted coat, when the couple journeyed to London to the unveiling of a plaque to Queen Mary by H.M. The Queen on 7th June 1967, at Marlborough House. It was to be the only occasion that they attended an engagement with the Royal Family.

In 1952, an articulated leopard bracelet joined the Duchess’s exotic menagerie. This was a sleek, sensual jewel, completely encircling the wrist, its supple body set with brilliant cut diamonds and calibre onyx markings. The only hint of colour was two emerald eyes.

The Duchess was very aware of the effect she created with her jewels, and in 1954 she commissioned from Cartier an accessory that was novel as well as useful, a tiger lorgnette. The tiger, modelled in polished 18ct gold striped with black enamel, surveys the onlooker with its emerald eyes, one paw raised in mid movement. After use, hinges at the side of the head fold back and it is slipped into its brocade pochette inscribed: “Please return to HRH the Duchess of Windsor Reward”. The Duchess kept a framed sketch of herself holding the lorgnette on her dressing table, by Rene Bouche for American Vogue in May 1955.

Two imperial tigers were added to her collection in 1956 and 1959. An articulated tiger bracelet, its body pave set with diamonds, shaded from white to fancy yellow, contrasting with onyx stripes and emerald eyes. When fastened on the wrist, the front legs hang free. Its companion clip was completely set with yellow diamonds.

On 11th December 1959 the Duchess was photographed wearing a dark lace topped dress, wearing the tigers at the Gala opening of the Lido Club in Paris. This evening appearance caused a sparkling yellow diamond wave to sweep through the Windsor circle, other bejewelled contemporaries Barbara Hutton and Daisy Fellowes soon commissioned their own big cat jewels.

The Windsor’s charmed existence ended in 1972 when the Duke died of throat cancer. In May of that year, at a dinner party in New York, the Duchess was asked by fellow guests Lady Pamela Berry and Hardy Amies if she would consider donating a piece of her jewellery to the Victoria and Albert museum. “I guess I could spare a Leopard,” she replied, but this was never to be.

In 1976 she became frail, and the round of gala balls and parties ceased, and as the Duchess’s health declined due to arteriosclerosis, the big cats’ sophisticated glitter and sparkle was extinguished as they were returned to the velvet interiors of the red and gold boxes for over a decade.

The Duchess died aged 90 in April 1986. She was buried beside “Her David” in the royal burial ground at Frogmore, her friend the Duchess of Marlborough viewed the flowers after the funeral. “It was tragic they were all from dressmakers, jewellers, Dior, Van Cleef. These people were her life”.

The Duke of Windsor adored her and loved to see her wearing the jewels he had helped to create especially for her, he never wanted them to be worn by any other woman. This wish was never to be granted.

The Duchess of Windsor’s jewels were catalogued by Sotheby’s to be sold at the Hotel Beau Rivage in Geneva on April 2nd – 3Rd 1987. In 1939 they had signed the visitor’s book to mark their stay.

A tented saleroom was constructed in the grounds of the hotel, the proceeds of the auction to benefit the Institut Louis Pasteur for Aids Research in Paris. The only public display of the collection was in New York, many members of their generation joined a jewelled safari to view the exhibits at a preview reception.

The sale was covered throughout by the press and television companies worldwide, the tent was completely packed, crowded with bidders in the saleroom and on the telephone. Givenchy provided elegant models to hold the pieces, displayed on black velvet blocks, as bidding escalated the atmosphere became electric, mounting with each new figure. When the gavel was brought down for the final time, the sale became the most important in jewellery history at that time. The pre-sale estimate was $7 million, they reached $50 million. The first panther brooch from 1948 sold for £63,374.

The diamond panther on the sapphire globe from 1949 was bought by the Cartier museum for £633,745; it was displayed at the Cartier Exhibition at the Grand Palais Paris December 2013 – February 2014.

Hancocks Jewellers Understands the Cut and Clarity of Diamond Jewellery