How Much Should You Really Spend On An Engagement Ring?

How Much Should You Really Spend On An Engagement Ring? 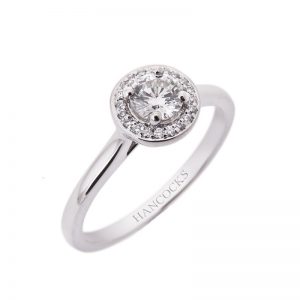 The mythology of the diamond is pervasive enough to transcend the resistance of culture. Jewellery, it seems, is immune to Father Time’s gaze, successfully promoting values and codes of honour that in most other trades would be considered anachronistic.

It is thanks to De Beers that the tradition of men spending one month’s salary on an engagement ring still tenaciously exists – or is it two? Or three? The truth is, the axiom varies depending not only on the period but on the geography.

Take the example of Japan. An article published by the BBC discusses how diamond culture exists in the Eastern province, and how Japan’s firmer codes of honour were exploited. Japanese men were encouraged by De Beers to spend three months’ salary, which was – according to feminist critic Rebecca Ross Russell – “a stroke of genius”, since culturally the burden of duty was far greater, meaning that men were more than willing to comply.

It is difficult to determine whether the onus for this drop may be assigned to the somewhat hyperbolised “death of chivalry” or instead to the tightened-purse-string attitude generated by the recession. In truth, it’s probably a combination of both.

But how much should YOU spend on an engagement ring? The reason that engagement rings usually start with four-figure price tags is that they are constructed from incredibly durable materials, meaning that they can last a lifetime. These materials are available for a premium, expounding the sometimes significant variations in price.

Platinum is currently the most popular metal used for engagement rings, since it is more durable than gold and immune to fading in colour. The most popular stone, unsurprisingly, is the humble diamond, with 75% of men choosing them over any other stone type. Diamonds are the purest stone available, consisting of 99.95% pure crystallised carbon, and can sometimes be billions of years old. For symbolising an eternal bond, there quite literally is nothing better. A quality cut also garners a surcharge, but it can make all the difference.

The one thing you have to remember is that your partner will be wearing this piece of jewellery for the rest of her life, so it needs to be something that she wants. You also need to pre-empt the reaction you will get from your partner when you open that box and thrust the ring into her face for the first time. You obviously want to ensure that she is amazed by your choice of ring, and you can tell by her reaction how she really feels about your choice.

Ultimately, if you make sure that you are buying for her and not for you, then the price won’t matter.